Merman of the Undersea [An Excerpt]

Hi dearies, I'm back! Though I am not quite active in blogging that much, I still write a lot. Creativity and writing is always there. It just transformed into a different platform.

Let me take this opportunity to share with you my upcoming story. This is a novella, a part of a series in  one Fantasy world. For now, it will be released as an eBook. And depending on the reception and the success of the whole series, I might release a physical copy as a compilation (*crosses fingers*).

I invite you to pre-order it. And to convince you, here is an excerpt:

A shadow of a skiff passed by the sea, obscuring the illumination of the moon in its depths. Silence filled the expanse, except for the soft paddles of the person on board. The merman wondered how the boat got past the guard, the leviathan that their Kingdom calls The Kraken. It was trained to allow only Merpeople into this cloistered ocean area. Unless…
He knew it was against the rules. He had swum too far from the Mainsea doing his job. But as a Resource Hunter; he has always violated rules if needed be, if the survival of their Kingdom depended on it. And this time, it might.
He had never swum this close to the surface in his lifetime. He was careful not to give a hint that he was there, and halted at the threshold. The law was sacrosanct: merpeople should not breathe the air of the land, though it was never explained why. Doubt entered his mind; death was not something he wanted today. Maybe this was a bad idea after all. He could just ignore the boat, whoever is on it won’t survive the rage of the ocean, anyway. He made an inch of turn to go back.
But the skiff halted. And a voice echoed...
“Is somebody there?”
The merman stopped in his tracks, and floated under the water, still and silent. The voice continued, “Don’t be afraid. I come in peace. May I go down? I just need to talk.”
He didn’t know how to respond. Some fish creatures can jump out of the water but he didn’t want to risk it. So, he just flipped his fish tail on the surface, hoping the stranger could get a hint.
He heard a splash nearby. Turning his head, he found another merman swimming towards him. He has a smooth dark fish tail. But he didn’t have scales between his fingers and his ears were round, unlike the merman’s fanned gills. An alien creature. He swam a pace back, senses ready for any defensive action.
The stranger stopped in his tracks, careful not to trigger him. He raised his hands over his head, a sign of surrender, and the merman calmed down.
He remained where he was. “People call me Slippery Goldfish. As you can see, I am a shapeshifter. I’ll leave as soon as possible.”
“What do you need? Why do you speak our language?”
“I studied the languages of the world. Part of the job,” He slowly put his hands down and relaxed, and approached the merman. “What is your name?”
“My name is Maoui. And what are you, strange creature? You, not telling me your real name is suspicious.”
“Maoui,” Slippery Goldfish replied. “Not knowing my real name is better for you. Trust me on that.”

Hope you like it. And if you want to know more about the story of Maoui, pre-order your copy here --> https://forms.gle/KfqiN7dSpXMbSG727

And here's more! If you pre-order, you will get a chance for a raffle entry to win free Mermaid Themed Tarot reading by a professional Tarot card reader, The Tita Tarot! So grab this deal now! 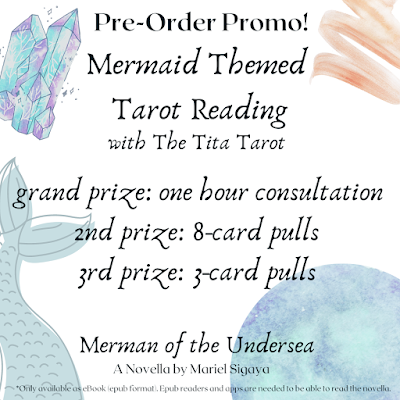