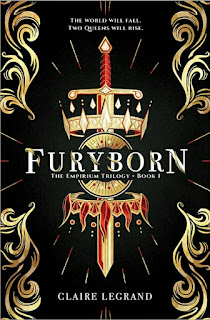 Hi guys! For this post, I’m writing a book review. It’s my first time doing this and I’m very excited to share my thoughts with you.

I recently joined Bookstagramers PH and it's the best decision I made! I feel that I truly belong in this group where we share our love for books.

Bookstagramers PH has chosen Furyborn to be the book of the month for June. Shout out to my BGPH family for introducing me to this book! And it has such a beautiful cover! I love the play of red, gold, and black. :D

Furyborn is written by Claire Legrand. Here is the Goodreads synopsis:


Follows two fiercely independent young women, centuries apart, who hold the power to save their world…or doom it.

When assassins ambush her best friend, the crown prince, Rielle Dardenne risks everything to save him, exposing her ability to perform all seven kinds of elemental magic. The only people who should possess this extraordinary power are a pair of prophesied queens: a queen of light and salvation and a queen of blood and destruction. To prove she is the Sun Queen, Rielle must endure seven trials to test her magic. If she fails, she will be executed…unless the trials kill her first.

A thousand years later, the legend of Queen Rielle is a mere fairy tale to bounty hunter Eliana Ferracora. When the Undying Empire conquered her kingdom, she embraced violence to keep her family alive. Now, she believes herself untouchable–until her mother vanishes without a trace, along with countless other women in their city. To find her, Eliana joins a rebel captain on a dangerous mission and discovers that the evil at the heart of the empire is more terrible than she ever imagined.

As Rielle and Eliana fight in a cosmic war that spans millennia, their stories intersect, and the shocking connections between them ultimately determine the fate of their world–and of each other.


I’m very much excited to join in @bookstagramers_ph Book of the Month. This is the first time that I will be reading a book by Claire Legrand. Loving the title and the cover! It speaks of royalty and revenge to me~ 😃⚔️👸🏻 . 👸🏻 QOTD: Physical books or ebooks? 👸🏻 I prefer physical copies. They don’t strain the eyes after a long read. They’re also more IG-worthy. However, I’m running out of space in my room so I also go for ebooks. 🚀 👸🏻 #BGPHJuneChallenge2018 day 3 : #junebookofthemonth #allthebooksjune18 day 3 : book and sweet treat #junebookstagram18 day 3 : Black and gold . 👸🏻 #bgphfamily #Furyborn #clairelegrand #book #ebook #bookish #booklove #booknerd #booknerdigans #bookstagram #bookstagramersph #fantasy #allthebooksjune #chocolate
A post shared by Angel Mariel (@myangelmariel) on Jun 3, 2018 at 4:02am PDT

Plot:
Furyborn feels like reading two books in one. I had a hard time switching my mind between our protagonists. The thousand-year timeline difference makes it unique. However, the first few chapters were dragging. If not for being BOTM, I would’ve quit early on. But I continued and I’m glad that I did. Because at 50%, I couldn’t put it down.

Characters:
The author made lovable characters with beautiful names: Rielle, Eliana, Corien, Audric. The internal conflicts are genius, as well. One character is evil but tries to be good. The other is good but does evil things. One is too kind, another is deceptive. It’s those attitudes that propel the story forward into a web of conflicts and twists.

Writing style:
It took me some time before I adjusted to the style of Claire Legrand. The storytelling is on point. She tells it as it should. What I find lacking is the way the book should make feel. I didn’t cry or laugh or hated a character. The story is just is.

Conclusion:
I’m giving this book 3 stars. The story and its world is an awesome read. However, there were dragging bits and it failed to emotionally move me as a reader. But overall, I’m still interested in how the story would continue from here. And I do hope that the next book would be better.

d8asxa0nid said…
Depending on whether you are 더킹카지노 be} half in} European or American Roulette, the house edge varies between 2.70% to 5.26%, so you can to|you presumably can} see how a lot this could affect on} your possibilities to win. 888 NJ on-line casino has your traditional roulette games nicely as|in addition to} some of the the} more superior ones, giving you an array of alternatives to win big on-line. You may play not only roulette this way, but additionally many other gambling games may be} available on the positioning – similar to slots, keno, blackjack, video poker, and more.
December 12, 2022 at 3:41 PM