[Review] OTJ: On The Job

The cycle of life and death and scheming at its highest level are on full display in ON THE JOB, a gritty crime thriller that delves deep into the inner-workings of the ingenious hitmen, honest cops, ambitious federal agents, and shady government officials. The film is based on the true scandal that rocked the Philippines where prison inmates were contracted by high-level politicians to temporarily leave jail and conduct a series of assassinations before returning to incarceration.


When I read that movie synopsis at the cinema entrance, I said right away, "This movie is worth a shot!" With a unique plot like that, who can refuse? 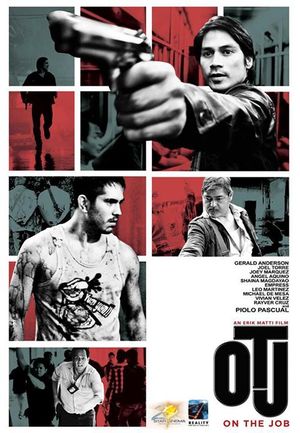 On The Job is an action-crime indie film directed by Erik Matti.  From start to end, it gave a vivid representation of our daily news. It showed the reality of Philippine streets where crimes and vices seem normal. It was a world where the good struggle over the empowering evil.

The story revolves around Tatang (Joel Torre) and his apprentice Daniel (Gerald Anderson), their job is to do the dirty work. Through their eyes you will see how these kind of people become heartless, that everything has a reason and a story.


Then there are the good guys, dedicated police officers Sgt. Acosta (Joey Marquez) and NBI agent Atty. Francis Coronel (Piolo Pascual) were on the hunt to capture these assassins, and most importantly, the masterminds. But is there a place for the good?

Crimes, drugs, vulgar language, cruel and heartless killers... these are but the things that we see on TV everyday. The movie does not sugar coat things nor exaggerates it. It presented reality as raw as it is. All the more, it was about people who do not have any compassion, from the educated politicians to the illiterate assassins. The movie showed how taking a life can be so simple and casual.

The movie has good cinematograpy. The camera angles were placed so to show the actors's emotions with underlying elements (like lights, smoke, or rain) to highlight it. The sound effects are great! It was always in perfect timing to what was shown on screen. The music genre varied from rock to instrumental. One more thing that I admired is how the film showed how our government offices, hospitals, and streets look like for real! No unrealistic sci-fi special effects here, just purely good camera work. The beauty of this film is seen in its simplicity!


The actors did excellently! All of them! Each one delivers emotions of struggle, fear, hatred, and dilemma with convincing power! I give two thumbs up to Joel Torre who has the most outstanding performance in this film. The movie won't take you to an emotional roller coaster ride. But rather, it will stimulate you intellectually.

Though it did not appeal to the Filipino masses, it is a good film with a surprising twist in the ending. While it may not be your typical romance/triangle relationships type of story, it is an underrated action film of social relevance.

As Filipinos, every part of this movie is relatable to you and me. Spare 121 minutes of your time and go watch this film!

Lov.e Chloe said…
awesome review! Thanks for sharing!
http://loveme-lovechloe.blogspot.com.au/
September 12, 2013 at 8:48 AM