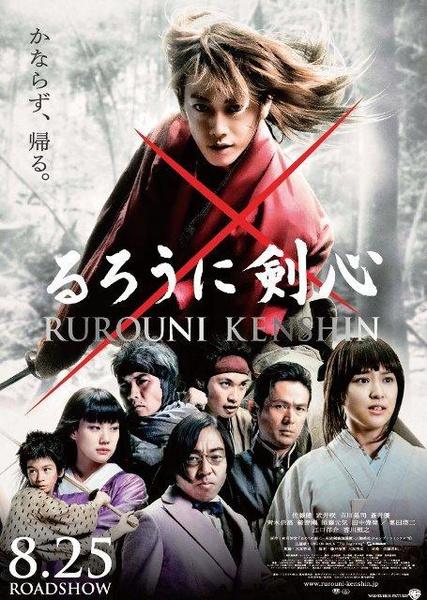 Rurouni Kenshin (also known as Samura X) is finally here in the Philippines! So I hurried to the nearest SM Cinema to have my share of the excitement! I will now give you my review of the movie. I am not biased just because I am a fan. In fact, I get all the more critical that way.

Rurouni Kenshin is about a swordsman named Kenshin Himura, who abandoned his past as an assassin. He started a new life by becoming a wanderer, and eventually helping other people. However, circumstances still challenge his will to live up to his commitment.


Kenshin and the other characters are humanly portrayed here. It's nice to see them with human emotions. The movie gave an emphatic version of the manga and anime. Every actor is very convincing in his/her role. Sato Takeru who played our hero had an outstanding performance. You could see Kenshin: funny, less-serious, and careless. Then, he could transform to a fast and fighting swordsman in a snap!

The plot is straightforward. It has been a long time since I watched a movie with a simple plot. The advantage is that you won't have to frustrate yourself with analyzing as you watch. The bad guys do bad things. The good guys fight the bad guys. Simple!


In my opinion, the plot was slow-paced but it made up with the fight scenes. It gets better and better each time. The action scenes did not follow the convention of slow motion action. If you have watched martial arts Hollywood movies, you might have noticed that complicated fight scenes are shown in super slow motion. However, in Rurouni Kenshin,  they emphasized on Kenshin's speed. Instead of utilizing slow mo, the people behind the scenes increased the speed of the action for crucial moments, and zooming out. No matter how fast Kenshin is, you can still see every movement executed in crisp detail. Every stomp of his feet, every swing of his sword, you hear it, you feel it!

The movie remained true to the traditional Japanese costumes as seen in the anime. The setting is historical. The color of the movie is somewhat different. It's not the full techicolor you see in modern movies. It's somewhat sepia-like with color. That way, it gives an aura of nostalgia all throughout.

For the special effects, it was done minimally. It is not the type you see in science fiction movies. It wasn't even obvious to me. Sounds were great too! It immerses you well in the scenes. What I liked best was when swords clanged against each other, or whenever Kenshin removes his sword from the scabbard.

I could tell that my fellow fans were also enjoying the movie. Whenever each character came up, they would murmur his/her name.  We got excited at every fight scene.At the end of the movie, we clapped our hands together. It's a sign that the movie lived up to the expectations! It remained true to Nobuhiro Watsuki's Rurouni Kenshin.