Be Limitless and See You All at the BDJ Fair 2012

October 11, 2012
I can't believe that it's just two more days to go before the much awaited Belle de Jour Fair! See you in SM Mall of Asia Music Hall on Sunday, October 14, 2012! Check out the photos below for more information in this exciting event! Just click on each photo to enlarge it. :)

I have shared with you the latest installment of planners that Viviamo, Inc. has in store for us in my previous post about the BDJ Fair 2012. This time, I will tell you more of what to look forward to on Sunday!

The 2012 BDJ Fair is open for everyone! You are free to drop by in the event. Here is a motivation for all of us: the latest editions of Belle de Jour Power Planner, Navi: Your Lifestyle Navigator, and the FMN Notebooks will be for sale at a 20% discount.The newest Everything Is Possible planner will also be released at 20% off. This exclusive discounted rate can only be availed at the event!

There will also be booths from different brand partners that we can enjoy for free! I'm so excited to try out the makeover and beauty booths! 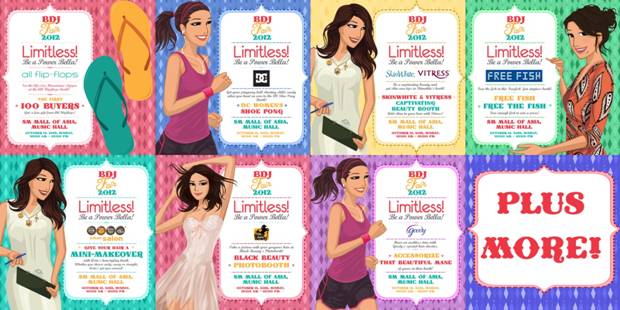 For a small donation of P100, you can have a VIP pass which will grant you access to the special booths which include bungee jumping, wall climbing, tarot card reading, and photobooth! The proceeds will go to Rocked Philippines and Sulong Kabataang Romblomanon, which are charitable institutions that Viviamo, Inc. supports.

I will surely purchase the VIP Pass. It is a rare chance to enjoy the event and help others at the same time. Plus, the VIP Pass grants access to the different talks which I pre-registered in. Some of the guest speakers will be Donna Cuna-Pita, Tricia Gosingtian, PJ Lanot, Patty Laurel, Divine Lee, Jasmine Mendiola, Erica Paredes, Georgina Wilson, and Fitz Villafuerte. I am so excited to see them in person!

With all these in mind, I will bring these essentials. And i suggest you follow this, too! :)
1. My super-duper excited self!
2. My friends!
3. Money ( for the VIP Pass and for the newest planners!)
4. An extra bag (for the prizes I might win in the promos or in the booths!)
5. A notepad to jot down the things that I will surely learn.

Take note, be in your most comfortable shoes. It will help if you will join the different booth activities and in walking around the fair.

For more information, visit their official Facebook page at https://www.facebook.com/BelledeJourPlanner