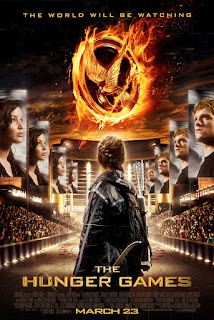 The film adaptation of Suzanne Collin's bestseller surpassed the book, at least in my opinion. I have read the first chapter and it didn't leave me with a good impression. That made me skeptical about spending PhP180 for the movie. But after positive reviews from raving fans, I decided to give it a try.
The Hunger Games is set in the futuristic world of Panem, which is divided into 12 districts. Due a bloody past, they have come up with a Peace Treaty. Every year, each district should send one boy and one girl (called as Tributes) to take part in a fight where only one survivor comes out alive. Hence, this battle is known as The Hunger Games.
The process of choosing is done through what they call The Reaping. The names of qualified residents are gathered in a large bowl and a district representative picks up the lucky boy and girl to be sent to the Capitol. The movie revolves around the story of Katniss Everdeen (Jennifer Lawrence), who  volunteered to be the Tribute after her sister was picked in The Reaping.
The world of Panem has made The Hunger Games into their form of entertainment, with the Tributes as the actors of the show. They make it seem that the Tributes' death is sacrificial and a good thing. The irony of it all is that the organizers of The Hunger Games treat the Tributes to the good life before the battle. Katniss and the rest of the Tributes lived in a luxurious hotel, served good food, and was given training for four days before the big day. And not to mention the media exposure they go through. It is much like a reality show, except that this time, death is real.
The movie's cinematography successfully presents emotions of the actors: fear, struggle, and the desperate need for survival. They do it through camera close up so that the actors' emotions are clearly seen on screen. Of course, this is also due in part to the actor's skill. And kudos to Jennifer Lawrence for that! She breathed her character through her superb acting. I was given a roller coaster emotional ride as I watched her character go through the struggle of being a
Tribute.
Since this is a death ring, there are pretty much of action scenes. Each Tribute chooses his/her own weapon of specialty. As for our heroine Katniss, she always has her bow and arrow. What I like is that the movie didn't present death in a gory manner. Blood was toned down to an acceptable level.
The special effects are convincing too. High tech gadgets run the world of Panem. It is reminiscent of a Big Brother world where everything is under surveillance. Inside the battle arena, the organizers of The Hunger Games could control the weather, time, and the terrain using a computer. They could practically control everything, except the Tributes' free will of choice.
Going further into the movie, there also exists politics between the Districts. District 1 being the richest, and 12 as the poorest. There are political conflicts in the movie but it wasn't presented in detail. Given that, you have to discern it for yourself.
As with the costumes... now this you can't miss! The costumes reminisce the Victorian era: corsets, elaborate head dresses, and heavy make up (for District 1). Actually, each district has their own fashion, from simple to grandiose. And since the Capitol is in District 1, you will see a lot of Lady Gaga fashion all over the movie. Not only that, you will always admire Jennifer Lawrence's look in every scene: from elegant and beautiful, to simple and masculine.
Each part of the movie is exciting!  You will all be treated to an unexpected ending, which leaves you wondering for hours after. Furthermore, it requires you to read between the lines to fully understand everything.
I must say, watching the movie made me an instant fan. I'll watch out for the upcoming movie adaptation of the next 2 sequels. However, it is not enough to make me read the book. Ah well! The Hunger Games... May the odds be ever in your favor!
Plot: 5 stars
Actors: 5 stars
Movie Poster/Trailer: 5 stars
Special/Sound Effects: 5 stars
OVERALL: 5 stars