Truth be told, I had other plans on the third Saturday of August (August 20, 2011). There was a cosplay event in another SM Mall. Before Saturday came, I had a dilemma on which one to choose. Would it be X-treme Cosplay in SM Bicutan or the 2nd Blogger Fiesta Manila in SM Cyberzone, SM North EDSA Annex?

Hmmm… after days of thinking, I finally chose to be in Blogger Fiesta. I told myself that I have already been to various cosplay events and there will be more in the coming weekends, like TOrCH Cosplay on August 27 and The Otaku Expo on September 3-4. But attending a gathering of bloggers would be a first for me. :)
I have work on Saturday mornings and so, I was late for the event and missed the previous speakers –and also the Fruitas Ice Candy (T_T).  The bloggers were already having a hot topic regarding the DTI issue. At first, I felt out of place because the people were talking about technical stuff.  Rather than listening to a forum that I didn’t understand, I took the time to observe the place. This event is a completely different one. Or maybe I just came from a hype of previous cosplay themes. There were no commercial booths and the place was not noisy. Blogger Fiesta had a classroom setting with chairs, a table and an LCD projector in front.
From that moment on, I conditioned my mind that this would be an educational event. At first, I decided to stay for just an hour or two. However, when the Q&A portion was over, the MCs started the hourly raffle and they announced that the grand prizes were a Sony Ericsson Cellphone (I forgot the model, sorry -_-“) or an iPod Touch. Yay! That urged me to stay until the end of the event. :) I wanted to win an iPod Touch!
A series of speakers went in front and shared tips for a better website.  (Click here to read more about it) Each one of them had their own areas of expertise and I learned a lot, though some topics were too technical for me. But I still made the effort to absorb and understand them all.
Other than that, I won LJC gift certificates in the raffle. Too bad my name wasn’t called for the iPod Touch. Oh well, I’m still happy that I didn’t go home empty handed. I’m usually unlucky when it comes to raffle draws. Winning like this was a rare feat for me. 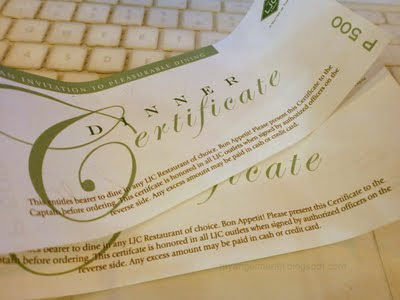 The most important thing that I took home from the event is meeting my fellow bloggers face to face. Hmmm….  By that I mean, knowing them by face only. I was too shy to approach and talk to them.  But I was very happy that I chose to be there rather than anywhere else.