May 26, 2011
May 21 2011 had been added to my list of memorable days thanks to the girls of Belle de Jour Power Planner. That special day was the BDJ Girls' Rendevous for the month of May. The theme was I Dream, therefore I can. It was one of the biggest event to date. Almost 100 slots were available to be filled. The invitation to the event was given through various contests. 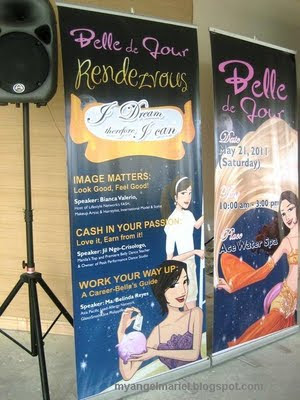 I got my slot in this event through the Belle de Jour Facebook Fan Page. They posted a question at exactly 2:54 PM of May 5, 2011. They posted a question as their status which was:
Question, Bellas:
How do you unwind/relax when you're stressed from school or work?
The first 25 BDJ Girls who will comment on THIS THREAD will get a slot at the BDJ Rendezvous: I Dream Therefore I Can! : )
When I saw that post, I immediately wrote "I watch my favorite teleserye." Woah! Believe it or not, I got the lucky 25th slot. Weee!
The Rendevous was held in Ace Water Spa in Ortigas. I thought that swimming will be involved, but BDJ later on clarified that there won't be. Awww... How sad. But nah! It is okay. I went there on a bright sunny morning. I have observed that the building was just newly opened because of the flowers at the entrance. The Ace building was named D' Ace PLaza. 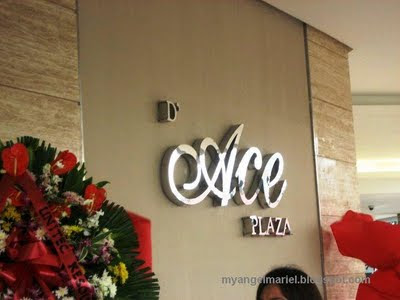 I was greeted with a warm welcome by the BDJ girls at the registration table (photo shown below; I am the one with a brown bag nearest to the girl in blue). They also gave me a goodie bag stub, a raffle coupon, and human bingo paper. I kept the first stub for later; I dropped in the box the raffle coupon; and the third paper, I took out and started to go around for a signature campaign. 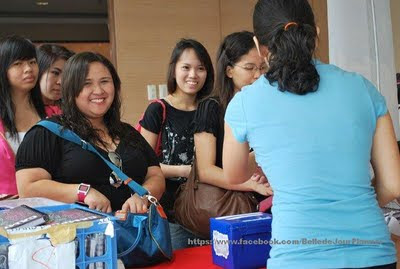 Shown below is a picture of my Human Bingo paper. It was full of names written by my new friends. Wow! I am amazed at how BDJ gave an opportunity for the Bellas to be BFFs at the start of the event. The most memorable girl for me in this part was Erica because she was the only one wearing bright blue shoes. Yay! What a rare find! I had her name on "Someone who's wearing blue shoes". 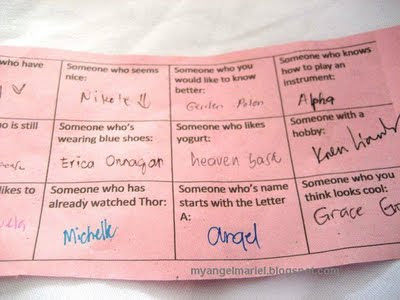 After a few minutes, the event was started by the host Jasmine. Her photograph is shown on the following photo. She had a very bubbly personality. She facilitated the games with excitement. We had a lot of games, like a memory game (pointing out all the girls who answered the Human Bingo), an apple game (sponsored by Bizu), and a dress up game (sponsored by SM GTW).  But that was just the beginning. 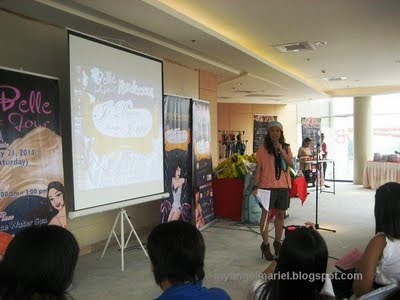 As I said earlier, there was a raffle stub. I didn't expect that they will give out prizes at the start of the event. Jasmine started to pick up some coupons from the drop box. And yay! I won a pair of sunglasses from Fly Shades! So happy! Shown below is a photo with my fellow Fly Shades winners. 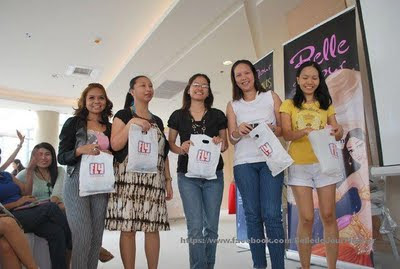 After all that hype for games and prizes, it was time for the information part. The first speaker was Ms. Belinda Reyes from GlaxoSmithKline. Her talk was about being successful in the corporate ladder. She said that each one of us should continually have a pursuit of learning. Ms. Reyes advised the girls to have a personal strategy for survival in our respective fields. She ended her talk with a very inspiring quote: "Believe in your ability to succeed, engage in lots of positive thinking, be a realistic optimist" 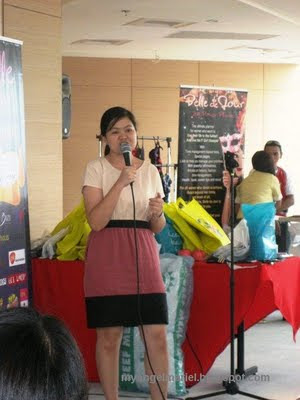 There were more games and raffle draws after that.There was another round of memory game where the leader would memorize our names with an adjective. I was given the monicker "Merry Mariel". Unfortunately, our team, named Oh La La, lost. Awww... but the good news was that, we were first to fall in line for lunch. :P
I was very happy that the food was free. There were clubhouse sandwiches, mini empanada, buffalo wings, and Italian spaghetti. I loved those healthy choices! Yummy! 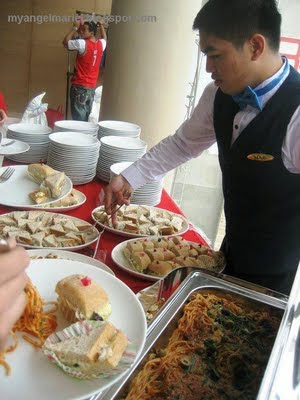 Of course! I won't forget my most favorite part! Desserts! I think these were from Bizu Patisserie. I love the mini blueberry cheesecake and tiramisu. <3 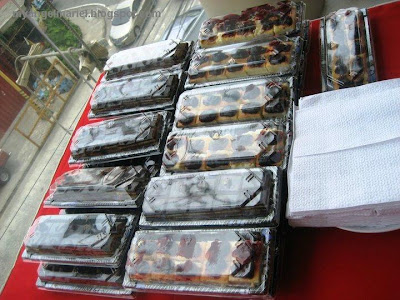 During lunch, the noisiest and adrenaline pumping part was up next. Hahaha! It was because of KC, a model of Strip. Together with Joni, they held a game where girls were able to win gift certificates. But I think every Bella won at the sight of KC! Hahaha! 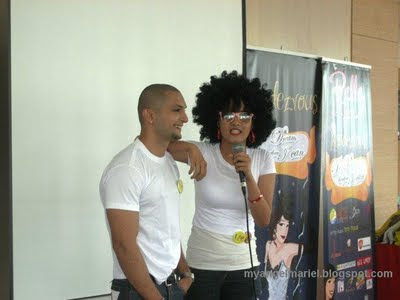 The girls who won prizes from Strip: 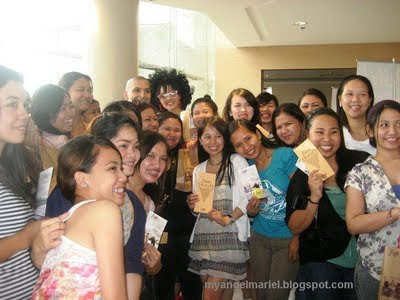 The next part was another inspiring talk from Ms. Jill Ngo-Crisologo. She is a renowned dancer and owns her very own dance and fitness studio called Peak Performance. Her topic was about following your passion and earning from it. She told us her story of how she started dancing. Ms. Ngo also had struggles at first, like undergoing lots of auditions until she was able to be a part of a dance group. She reiterated that we should not be discouraged when we are faced with failures and rejections. What I won't forget from her is this statement: "We may not earn much from our passion, but we end up happy with it" :) 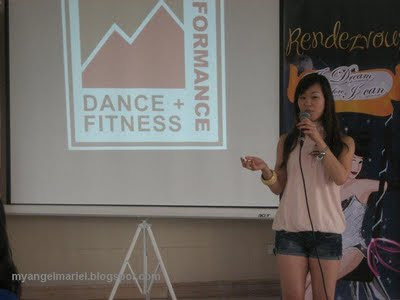 Ms. Jill Ngo, before ending her talk, told us to stand up and dance to the song "I permit myself". She lead all the Bellas in doing the steps. 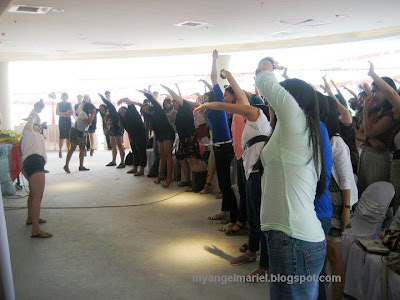 The final speaker was a professional model and cosmo.ph columnist, Ms. Bianca Valerio. She talked about how to enhance our looks. Our appearance talks a lot about us, she said. Ms. Valerio told us to invest in ourselves because no one will invest in someone doesn't invests in herself. She also gave tips on groomming, putting on makeup, choosing the right nail polish, and posing for photos. 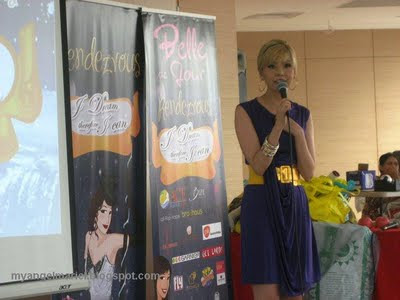 It was from Ms. Valerio's talk that I got my most important lesson of the day: to accept our physical attributes as it is. I never liked my hair because of its bushy quality. But when she said. "Accept your hair as it is", my heart jumped. It is nice to hear that coming from a model, who was always viewed with perfection from head to toe. And she said that it should not be just the hair, but every part of our body. Wow! Her final advice was to highlight our assets. :)
There were more games after Ms. Valerio's talk. And personally, I was getting information overload. Hahaha! After that, the BDJ staff handed out colorful sheets of paper for us to fill out with our dreams and learnings.
I wanted to enter a game and win a prize! When Jasmine said, "We need 15 girls to come and share their learnings!", I quickly ran to the front even if I was not yet finished! I was very determined to win this time! :)) And yes! I made it to the top 15! Yay!
The photo below shows other girls who were first in the line: 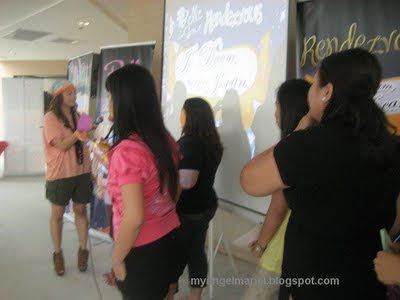 The next photo is my piece of paper with my dreams and learnings on it: 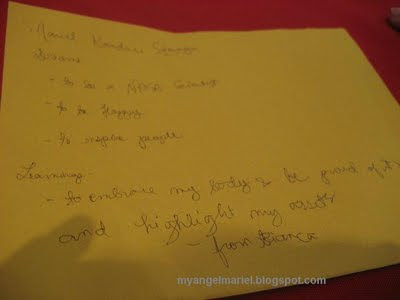 Yay! Because of it, I won a gift certificate from Browhaus. 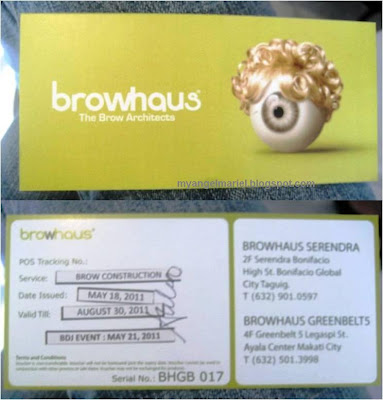 I was so happy to be there! It was so funny that Jasmine ended the day with an ambush as she said, "Wala nang prizes! Tapos na!". Hahaha! All the girls then stood up and started falling in line for the goodie bags. Wow! I never had a day like this. I couldn't believe that everything was free: the prizes, the inspirational talks, the goodie bags, and even the food! Aside from all of these material goodies, I went home with far better treasures: my new friends. Thanks Belle de Jour for this awesome rendevous. 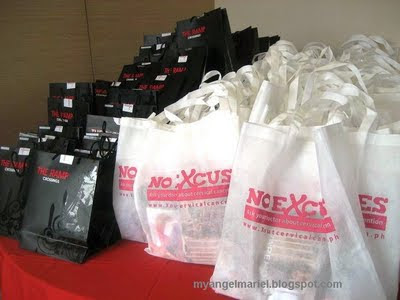