April 23, 2011
Animé enthusiasm is more than watching Japanese animation. It may start with that but the interest eventually evolves into reading manga (or Japanese comics), collecting toys or action figures, playing video games, drawing, costume playing, and lastly, getting into photography. The end result of this kind of passion is being into Japanese culture itself. Fans of this movement are called “otaku” which means “nerd” in Nihongo.
I would like to focus on one aspect of being an animé fan: the costume playing (cosplay) facet. It is defined as dressing up as a popular character, may it be from animé, manga, movies, or even celebrities (do I hear Lady Gaga?). Cosplay has been widely adopted as a hobby by many fans. There is no greater joy than donning in your favorite character. However, it is more than just costumes, the cosplayer should also “wear” the personality of the character they chose.
Here in the Philippines, cosplay has earned a footing over the years. As more and more get interested in animé, more events catering to this art form also sprang forth. This is good for the industry and Filipino artists, as well. Being creative is more fun and worth it if money is generated.
When one thinks of cosplay, the name Alodia Gosiengfiao comes to mind. She is one of the popular cosplayer in the country.  Alodia has also garnered several awards in this field which earned her the title of Cosplay Goddess. Her passion for the art is obvious from the way her costumes are made. Not only that, she also gets into the persona of the character and projects it well. These are the reasons why she stands out from other cosplayers. Most of the time, you can see her in tandem with her sister Ashley. These sisters are a team when it comes to presenting cosplay as an art form. Below are some pictures of Alodia doing her craft: (credit goes to Alodia  Gosiengfiao http://www.facebook.com/photo.php?fbid=153855596746&set=a.423935641746.223990.152138396746&type=1&theater ) 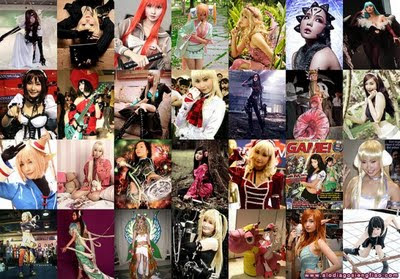 I started to like Alodia, Ashley, and cosplay when I read the feature on Ozine no.1. They were cosplaying characters from the online game Ragnarok. It was then that my interest started to level up from being just an animé fan watching all series and OVAs.
If life has given me the opportunity, I would have made cosplay as part of my list of hobbies. However, I grew up from the province where animé remains only to be seen on TV. There was no cosplay, no events, no nothing. As a result, my creative talents remained undeveloped. There was just no way that this dream could come true.
After finishing university, I moved here in the metropolis. Yay! I finally had my share of otakuness (pardon me, I just made that term up :P). The events, conventions, and cosplay! Yay! Given every chance, I go to these gatherings and take photos of cosplayers. It is very amazing to see wonderfully crafted costumes for real. You could feel the effort and passion put into it.
Every time I see these artists in costumes, I feel a mixture of happiness and sadness; happy that I am able to see them, yet sad that I could not immerse myself in this kind of art. First, my age is already twenty three. I should take life seriously: finding a stable job, support my family, and grow my career.
But have you ever felt that life won’t be complete if a certain job is undone?
Well, I have the answer to that. Cosplay has always been a part of my passion, even if I never put on an animé ensemble. This desire carries on until today. And regarding age? Hmmm… Alodia is also on the same age as me and she still cosplays. She proves that age is not a hindrance to achieving what you’ve always dreamed of. Alodia Gosiengfiao is a source of inspiration for me. As long as she cosplays, I will keep the hope that I can cosplay too. I’m looking forward to the day when my artistic side evolves from just watching characters on the silver screen to becoming a cosplayer and be the character.