[Review] Michael Jackson's This Is It 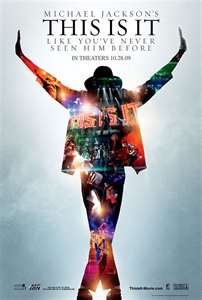 "Like you've never seen him before" is really the appropriate subtitle for Michael Jackson's This is It. It presents the artist on his last performance on stage. Not only that, it also gives a glimpse of behind the scenes footage, which defines Michael Jackson as more than a performing artist.

In 'This is It', Michael Jackson could be seen as a musician, an artist, a dancer, a singer, a filmmaker, a critic, and a superstar performer. But above all of his works, you could see that he is a person and leader, capable of touching those around him. He gave corrections and instructions to his musicians, ever mindful of his perfectionist personality. But he did these with kindness, always reminding them that this concert is done for "L-O-V-E. Love" Indeed, this passion could be felt as Michael Jackson took control of the stage during his performances.

There were less narrations in 'This is It', as opposed to common documentaries. And that is one of the outstanding features of this movie. Every song has a story to tell: first, you could see Michael Jackson working behind the scenes; then, it gives the opinions of the staff involved; and finally, it concludes with Michael's smashing performance on stage. As a bonus, some highlighted songs had cinematics or mini-films that come with the performance. And the stage is a piece of art in itself. The props they used included unique elements like light and people. Indeed the preparations for 'This is It' was grand, and this movie presents that in vivid detail.

For that reason alone, 'This is It' becomes a concert documentary. There is excitement, euphoria, and adrenaline rush that a real Michael Jackson concert can give. Plus, the audience is given that much-needed information about the artist at work, enabling them to grasp Michael's passion to his craft. Furthermore, it drives the audience to wonder about "what could have been...".

The sounds were perfect! Seeing the movie in IMAX is the best recommendation but the sounds also do well in ordinary cinemas. You could hear the killer bass lines, the smashing percussions, and the other music elements at work. And one highlight was Orianthi's solo guitar performance in "Black or White". The sounds were of high quality, close to those of a real concert.

The lights were excellent, too. Even for a rehearsal, the lighting elements were already pumping up. Every angle was good. There were magnesium explosions and impressive pyrotechnics. Michael Jackson was bathe in a spectrum of colors that became a feast on the eyes.

The special effects were incorporated in the song cinematics. They looked like real and they pop out in IMAX screens, even in 2D. What's amazing is the genius of Kenny Ortega (the movie director) and how he embedded these cinematics with Michael's onstage performance.

Unlike an ordinary movie, 'This is It' has no ending. That was left for the audience to think about. Because really, Michael Jackson's music continues on forever, even as he said, "This is it... the final curtain call."